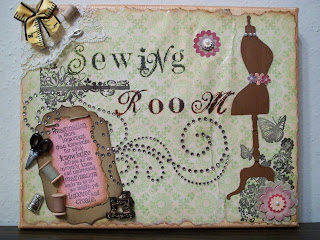 I just made a "sign" for a friend at church who saw the canvas I made for my mom. Rebecca said she wanted a hanging like that declaring her new sewing room. At first she said shadowbox and then said like the thing I made for my mom which is canvas. So I went back and forth, shadow box or canvas. I just got all of the elements laid out how I wanted them to go and then decided to go with canvas. Can I just admit right now that I HATE mod podge. That stuff crinkles my paper something fierce. Granted this is only my 2nd time using it so it "could" be user error. Oh well.
Still, I LOVE how it turned out. I used several different mediums and that just tickles me to pieces. I mod podged the paper to canvas (edged canvas with Tim Holtz dabber in gold) and tore the edges of the paper, then inked it with TH's brushed corduroy, stamped and embossed "sewing room", stamped the flourishes in the corner bottom right , butterflies and the flourish under "sewing" I cut out the dress form using the Cricut Summer in Paris at 6 1/2" glimmer misted and added pearl bling from K and Co. Stamped the "imagination" sentiment (tim holtz set) and tore the edges, inked with brushed corduroy and glimmer misted then backed on cardstock cut out with Spellbinders labels, inked that too LOL Hot glued some buttons from Hobby Lobby (the sewing items) and added the lace at the top with the rest of the bits from the button pack. Super cute buttons!  Prima bling in there too, LOTS of drama with the bling, I don't want to talk about it right now...  :P
I went back and got 2 scrabble -esque tiles and glimmer misted those and threaded on lacy ribbon, glued up top to say "MY" right above "sewing room" (did that after pics). Came out really cute, I'm happy with it enough to give it to her tomorrow LOL Whew. Fun night crafting!
I hope you had some crafting fun today as well :)
Thanks for stopping by
StephanieD
Posted by Stephanie at 10:03 PM